Pagan Blog Project - U is for Unicorn 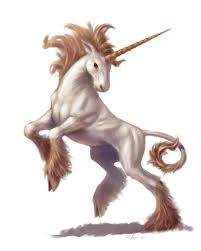 Unicorns are magical and are associated with the earth element. Originally unicorns are believed to be all white with cloven hooves and a goat's beard and can be tamed only by a virgin. Unicorns do not appear in Greek mythology but in accounts of ancient natural history. Perhaps the ancient historians saw a deformed animal or unicorns are now extinct?

The magic of unicorns lies in the horn. Ground up unicorn horn is said to be an aphrodisiac and can cure sickness. As you know, unicorns are very rare and should not be hunted simply to harvest the horn. The tears and blood contain magical properties as well.

Unicorns should not be confused with narwhals, a type of marine animal with a protruding tusk. Due to intermingling, many hybrids exist:


Diet of unicorns is that of horses. Unicorns prefer forests to open spaces and urban areas. However, if you are able to open a portal, say in between 2 trees, you may be able to coax one out. Being a virgin is unnecessary but you must have pure intentions. Unicorns are telepathic; they may appear in visions during meditation.

Posted by Buddhagan at 8:00 AM