The Triple Gem, also known as the Three Treasures or Three Jewels, are primary objects of devotion in Buddhism. Depending on the tradition the Gem is defined differently. I will define them for my practice. 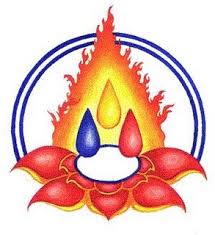 My practice does not require me to take refuge in the Triple Gem. I suppose this is sort of like a Buddhist dedication. At any rate, the Triple Gem is a good foundation for any Buddhist practice.
Posted by Buddhagan at 7:08 PM