Pagan Blog Project - A is for Astrology

Tropical vs Sidereal vs Astronomical Astrology
Astrology deals with the zodiac. The signs of the zodiac share their names with constellations. Way back when, the zodiac sign and the constellation of the same name was located in the same place in sky. The sun was at 0 deg Aries the moment of spring equinox Since the earth wobbles as it rotates - think of a spinning top - today's sky is very different. The sun is no longer at 0 deg Aries for the spring equinox. However, most horoscopes in the US are still based on the old sky positions. This is tropical astrology.

The horoscopes in the East are based on the sun's position as it is in today's sky. Sidereal means of the stars. If the path that the sun appears to travel - called the ecliptic - is divided into 12 equal parts, the sun would be at about 5 deg Pisces at the spring equinox. By the way, have you heard that old song Age of Aquarius? The age or time period refers to the sidereal location of the sun. We are currently in the Age of Pisces. Astrologers and astronomers alike disagree on when we will be in the Age of Aquarius but it will occur within the next 100 or so years. There are very few Western sidereal astrologers. I have yet to find a daily sidereal horoscope. Sidereal zodiac signs are about 25 days ahead of tropical zodiac. (See this chart.) I prefer sidereal astrology.

Astrology is a huge topic. I recommend Astrology for Dummies if you want a basic understanding. Keep in mind this book is based on tropical zodiac. Go to Astrodienst for a free chart.

Using astrology in rituals
There are 8 moon phases and 12 zodiac signs. That's a potential for 96 different esbat rituals! OK, well maybe not completely different but at least you can work on certain things depending on the phase and sign. Each sign is ruled by a planet. In astrology, the sun, moon, and even Pluto are considered planets. To go further, each day and hour are also ruled by planets. If you're obsessive-compulsive like I can be, you can cast a spell when the moon is in the right phase, in the right sign, on the right day, at the right hour. Whew! Don't feel like it is necessary to cast a spell like this. Astrology is supposed to be a helpful tool, not a hindrance. If you find yourself not wanting to make a decision before consulting the stars, then it may be time to take a break.
Posted by Buddhagan at 9:58 PM No comments:

Over a calendar month ago, I lost my job. I thought about looking for a new job this moonth but decided to take  some more time off. Tonight's ritual was about introspection. I used my father's favorite foods for the cake and ale portion and played a CD with drumming music.
Posted by Buddhagan at 5:35 PM No comments:


When I joined the PBP, I came in on the 2nd week of C. I've been itching to do Computer. Why? Well, if you are reading this post, you are using one, whether it's a laptop, desktop, tablet, or smartphone. If it weren't for computers, I would still be struggling with finding Pagan info and communities. TechnoPagan FTW!! There are zillions of Pagan blogs, Facebook groups, Twitter accounts, podcasts, etc. There are virtual altars and covens. When I cast my circle, I typically include my computer in case I need to look up something or play music via iTunes.

I love the Computer Goddess! 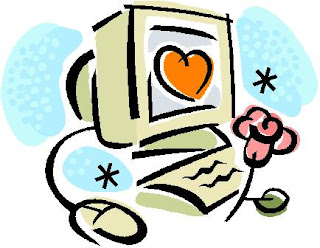 TechnoWitches have eBooks of Shadows that they may share online at his/her website or save it via USB drive for personal use. Yes, I know our ancestors did not have access to the 'net and many traditions then and now are still oral. But I see no problem with using the technology that we have today to further our spirituality. Do you use a CD for circle music? Do you have an email list for your coven members? Do you drive a car to the local Pagan conference? I use an app to track the moon phase (Deluxe Moon) and one to track various earthly bodies (Google Sky). And for those of us who are really into magic, there is an app that tracks the planetary hours.


I have a degree in Applied Information Technology. The Goddess in me absolutely loves computers and electronics. I haven't quite come up with a mythology but the Goddess of Technology is my matron goddess. She is Unnamed at the moment but Her domain (heh heh!) is electronics, computers, technologically advanced ancient civilizations, and the Internet. Can't find your iPod? Did your hard drive crash? Mobile phone lose all contacts? Ask the Technology Goddess for assistance.


As much as I love computers/technology, there is a need to unplug every once in a while. After all, being pagan is about nature and connecting with the daily/monthly/yearly rhythms. Take some time away from all screens and read a book or go outside - or read a book outside :). Being a TechnoPagan means using technology for us and not letting technology use us.


What are some of the ways you use computers in your practice? Feel free to share your favorite apps, websites, eBooks, etc.
Posted by Buddhagan at 2:15 PM 2 comments:


I've been thinking of my father a lot lately. My folks divorced when I was about 9. Since my mother was bent on getting a scriptural divorce, she and my oldest brother caught Dad with another woman. Yeah, so Dad was made out to be the bad guy. I don't have any pictures of him. When he died, my siblings and I split up his record collection.


I went to his grave for the first time this past Samhain. It was peaceful. I have so many unanswered questions. Like, did my mother push him away because she was uber-religious? Mom told me that she fell out of love after the first year or two. Why she decided to be miserable for 20+ years is beyond me. I don't recall Dad being around when we did fun stuff. He used to work at the bakery until he got laid off. He drove a green Buick Centurion and made it clear that it was his car, not the family car. 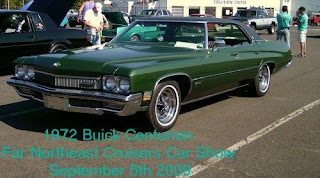 Dad loved his music. I remember he would listen to his records with his headphones on, patting his feet to the beat. My sister and I would watch him shave. I have no idea why this was so fascinating to us. His favorite lotion was Jergens; I can't remember what cologne he wore except that it was in in a bottle shaped like a car. He loved Pepsi and those really hard pretzels. I think his favorite color was green. He made us scrapple, egg, and cheese sandwich and called it a Super Duper Daddy sandwich. He like to watch Kojak and Sanford & Son.


I'm thinking of ways to try to contact him. Trance, dreams, ouija board - I have no idea. Should I collect his favorite things? Wait for his birthday, Father's Day, specific phase of the moon? There is much that I need to know now that I'm grown. Instead of focusing on the negative, I want to remember and build on the positive.
Posted by Buddhagan at 9:22 PM 4 comments:


A couple months ago I remarked that I felt that the Gregorian calendar is not quite right. I saw the pagan blog project on Twitter and someone had posted her magical calendar. Yes! I'm not the only one! I'm still working out the kinks but I do feel better. So at the risk of sounding like a complete nut job, here are the details of my calendar. Everything is subject to change:


Sabbats and other holidays
I celebrate all sabbats on the astronomical days, not the traditional days. As such, the dates change yearly.
Dec 20 - Mother's Night, 1st day of Yuletide


Dec 25 or thereabouts - Festivus. This is one of our floating holidays. We will celebrate it when all family members are available and cook a traditional dinner.


That's all I can think of right now. I would like to integrate some Buddhist holidays into my calendar. I use the Gregorian calendar to sync with the world around me and to plan future events. My magical calendar is for daily / monthly meditations.
Posted by Buddhagan at 6:32 PM No comments:

I was able to do my ritual tonight. Hubs helped me with the words to release the quarters. My esbat ritual is still not perfect but it's getting there. Went outside to view the Moon. It was too cold to be outside for long,  though. Energies were amplified since the Moon is in the sign She rules. I'm thinking of getting this Isis statue from eBay: 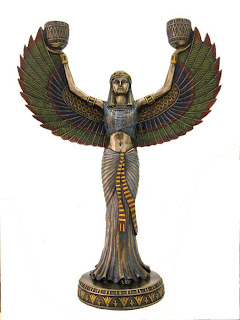 I had ordered a kneeling statue but it arrived broken and the paint job was poorly done. I want a statue candleholder so that my altar won't be cluttered. There aren't may Isis statues to choose from; I was hoping for a black and gold one. .

Thinking about rereading Wicca & Witchcraft for Dummies. Now that I have my own path, my understanding has increased. May do a new BoS, this time in a 3-ring binder. I also need to integrate my Buddhist practice into my Pagan practice. Meanwhile, I'm starting a set of flash cards to remember things. This will come in handy in teaching my future child :) Oh yeah, I need to work on my Goddess charges as well. Lots to do while I'm unemployed.
Posted by Buddhagan at 4:54 PM No comments:


Since the weather is nice, I opened up all the windows and burned cinnamon. I couldn't find a definitive scent so I hope Brigit won't be upset. Astronomical Imbolc occurs when the sun is at 315 degrees on the ecliptic which is 15 deg tropical Aquarius or 20 deg 5 min sidereal Capricorn. This will happen 2/4 5:22 am EST.

Bridget is the Goddess of poetry. Here is one of my favorite poems, kinda how I feel right now:

The Tunnel by Mark Strand

A man has been standing
in front of my house
for days. I peek at him
from the living room
window and at night,
unable to sleep,
I shine my flashlight
down on the lawn.
He is always there.

After a while
I open the front door
just a crack and order
him out of my yard.
He narrows his eyes
and moans. I slam
the door and dash back
to the kitchen, then up
to the bedroom, then down.

I weep like a schoolgirl
and make obscene gestures
through the window. I
write large suicide notes
and place them so he
can read them easily.
I destroy the living
room furniture to prove
I own nothing of value.
When he seems unmoved
I decide to dig a tunnel
to a neighboring yard.
I seal the basement off
from the upstairs with
a brick wall. I dig hard
and in no time the tunnel
is done. Leaving my pick
and shovel below,

I come out in front of a house
and stand there too tired to
move or even speak, hoping
someone will help me.
I feel I’m being watched
and sometimes I hear
a man’s voice,
but nothing is done
and I have been waiting for days.
Posted by Buddhagan at 7:21 PM No comments:

Today is the first day of (pagan) spring. Hopefully it will stay unseasonably warm.
Posted by Buddhagan at 6:52 PM No comments: