There was the possibility of me actually going outside and enjoying daylight and warm weather but unfortunaly I'm sick. I do have my bedroom window open though to air out the place.
Posted by Buddhagan at 7:00 PM No comments:

First thing that comes to mind is part of the intro statement of my congregation - "wherever you are from, whomever you love, you are welcome here."
Posted by Buddhagan at 7:00 PM No comments:

Part of my healing as an exjw involves doing things that I was forbidden to do. Next on that list is to give blood. One pint of blood can help heal up to 3 people.
Posted by Buddhagan at 7:00 PM No comments:

Ah, this will be interesting. See, UUs have a very broad view of Deity. Some of us believe, some don't. And those of us who believe, some of us pray and some don't. Me? Well I don't pray like I used to when I was Christian. There is no male God in the sky that I beseech. I do not end my requests with "in Jesus' name"; there is no need for a mediator on my path. I feel prayer is more of a reflection or meditation. Deity is within us so praying is accessing that energy. So no, I will not type Amen on your Facebook post and I will not pray for you unless I can follow up that prayer with action. I may give you a spell / ritual to follow to further your goals if you ask for it.

I have a few sets of Buddhist chanting (prayer) beads which have sadly been unused for quite some time. Some Pagans have their own meditation beads (check out etsy) and I think you can make some UU prayer beads. This site right here has some awesome info for making a variety of prayer beads. Of course, if you pray, you don't really need anything but yourself. Extra items and rituals help to focus the intent.

On this day in 1942, then President Roosevelt signed an order imprisoning US citizens of Japanese descent. Camp conditions were horrible. Did I mention they were US citizens?
Posted by Buddhagan at 7:00 PM No comments:

I fear being alone. I'm halfway there with no immediate family and no childhood friends due to the shunning practice of my former cult.

So cliché!  I have no idea what they are looking at. 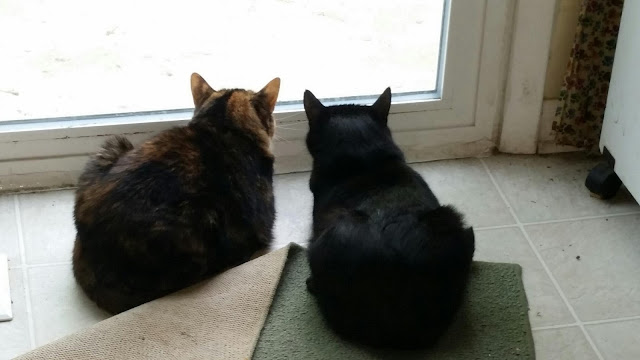 Posted by Buddhagan at 7:00 AM No comments:

I informed my boyfriend today that he is an earth sign (Taurus) like me (Virgo). No, he says, I'm an air sign (Gemini). I briefly try to explain the difference between the sidereal and tropical zodiacs. And it's not small. It's about a -25 day change, that is, your actual sign may be the one before it..

My husband is a fire sign (Sagittarius). I didn't need astrology to tell me that I'm dealing with 2 different personalities. Hubs is more practical and plans things out and bf kind of takes things as they happen. Hubs is quiet and bf is boisterous. Me? I find I adapt to whoever I'm with. Seems that they each bring out a different part of me.
Posted by Buddhagan at 5:12 PM No comments:


I work nights so most of the time it's quiet. Unless of course we have some interesting topic to talk about. We keep our part of the office batcave-dark with only the lights from our computers - and the hallway. Anyway, I didn't get a chance to take a picture of the dark parking lot with just a dusting of snow on the cars so here is a song instead.


And because this is the weekend for Baby Love Sniper, here is a more sensual song. Love's Taken Over (quiet storm mix) by Chante Moore.

Devotion - 1. love, loyalty, or enthusiasm for a person, activity, or cause.
I see why a lot of us are posting pictures of our pets. Samus, my toy poodle mix, was my very first pet. She's too smart for her own good but I can tell that she loves me unconditionally. Some trainers say to have your doggies greet you calmly. I prefer the enthusiastic jumping, tail wagging, happy barking greeting. Samus won't let me even go to the bathroom until I give her "high five".

Are there any Pagan daily devotionals? Probably none that are centralized. I've been trying to craft my daily practice. The JWs have their version of Our Daily Bread called Examining the Scriptures Daily aka the daily text. So the desire to do something spiritual is kind of hardwired in me. I've been drawing a tarot card from the Liber T deck before going to sleep. This makes for some interesting dreams when I can remember them.

The closest thing to a UU daily devotional is the online Daily Compass. Check it out.
Posted by Buddhagan at 7:00 PM No comments:

This is year 3 of the unofficial* UU Lent online practice founded by Barb Greve and Karen Bellevance-Grace. I attempted to do this last year but didn't quite make it through. So I'm trying again.

Lent is a Christian holiday starting on Ash Wednesday and ending on Easter Sunday. This period of time is fairly close to the Pagan Imbolc (Feb 3/4) through Ostara (March 20/21). Practitioners usually give up some "vice" (smoking, drinking, eating meat, sex) as some kind of penance. Although the Unitarian Universalist religion has its roots in Christianity (Unitarians and Universalists merged in 1965), most UUs do not consider themselves Christian; we modify our UUness with Pagan, Hindu, Buddhist, atheist, agnostic, Jewish, etc. What makes the UU Lent different from traditional Lent is that we're not asked to give up anything. Instead, we are to reflect on the keyword of the day in anyway we see fit. So no matter what flavor of UU your are, you can participate. Here is the original Facebook link for this year.

Take a picture about what the keyword means to you, write something about it, and use #UULent on social media so that we can find each other.

I may do some retroactive posts to make a "Pagan Lent" season. As such, my posts for this practice will end on Ostara / Spring Equinox.

*I compare this practice to Chalica, another unofficial UU holiday, in that UUs are not required to observe. Actually UUs aren't required to observe any holidays. We're not going to suffer eternal damnation if we don't or get more heaven points if we do.
Posted by Buddhagan at 7:00 PM No comments:

My husband is okay with me marrying my boyfriend.

What? you say. Don't worry, I'm not breaking any laws. All 3 of us are well aware that polygamy (marrying more than one spouse) is illegal in the US. As far as biblical laws, well, none of us are Christian so there's that. As you may know I'm Buddhist Pagan Unitarian Universalist and my men have no particular religious affiliation. My political affiliation is Libertarian. I'm all about personal freedom and choice as long as it doesn't infringe on anyone else's freedom and choice.


And now I will take questions:


How does it work?
Well, for me, my husband knew I was polyamorous when we met. He still married me knowing that this would not change. The most important rule was honesty. If I was going on a date, I told him. Unfortunately, my dates didn't quite know what poly was even though it was spelled out in my dating profile. Once I told them that my husband was well aware that I was on a date, they lost interest.

And your boyfriend?
He knows how to read and he understood my profile. Win win.

How's the sex?
How's the sex in your relationship? Just because I'm not in a traditional relationship that doesn't mean I want to talk about sexual specifics. But since you asked, none of us are complaining.

Why have a ceremony when it's not legal?
Because my boyfriend is important to me and because why not?

You sinner! You will burn in Hell!
I don't believe in hell so....

Do you have any questions for me? I'm not an expert and I will try to point you to other resources if I don't know the answer.