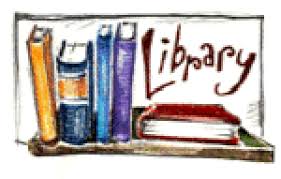 This week (April 13-19) is National Library Week. Visit your local library. Make sure that your library card is valid. If you don't have a library card, get one. You can borrow more than just books. Libraries have CDs, DVDs, ebooks, video games, and audiobooks. Your library probably maintains at least one social media account. Follow it/them to keep abreast of events.

Fun Facts
Did you know that many libraries have interlibrary loan agreements? This is a way to borrow books outside of your local system.

The proprietary Dewey Decimal System is still used to classify library materials. First published in 1876, its last revision was issued in 2011. DDS caters to an Anglo-American view which prompted some libraries to adapt the Book Indusry Standards and Communications (BISAC) system used by commercial bookstores.

The Library of Congress, housed in 4 buildings, is opened to the public but only high-ranking government officials may check out materials. It is also the world's largest library.

You can get a degree in Library Science / Library Technology.
Posted by Buddhagan at 7:34 PM No comments: