Yeah, we knew Z would be difficult! 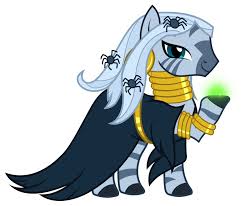 Zecora is a character in My Little Pony: Friendship is Magic. She is a zebra who lives in Ever Free Forest. What does she have to do with the pagan project, you may ask. Well, Zecora is a witch. I don't think the series comes out and says it but the inference is there. When Zecora is first introduced, the other ponies are afraid of her. She speaks in riddles with a Nigerian accent and her hut is filled with potion bottles. Her cutie mark (the symbol on each flank) is a stylized sun. Once the ponies get to know Zecora better, they come to her for all sorts of ailments and include her in the town's celebrations. 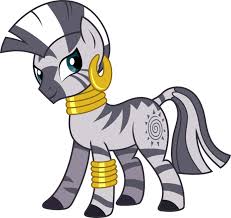 This portrayal of witches is a bit stereotypical but I don't think it's in a negative way. People are often afraid of others who isolate themselves and are different. None of the other ponies have accents. They all live in town - the main characters live in Ponyville - not in the forest like Zecora. Witches are more accepted today than in the past. However, there are still some of us who still have the need to stay in the broom closet.

MLP:FiM is a kids show that has a whole community of adult followers. I hope that by portraying witchcraft in a positive light, society can continue to accept us.


This is a video of the G4 cosplayers for the 2012 My Little Pony Fair. Being Zecora was a no-brainer!
Posted by Buddhagan at 1:35 PM