I spent all day studying astrology. More specifically how astrology relates to tarot. I have 2 decks - Mythical Goddess and Sun & Moon - that assign zodiacal correspondences to the cards. I wanted to learn more and understand the logic behind it. What I wind up doing was reassigning the minor arcana to reflect modern times. Whether this will make sense in the long run remains to be seen.

Chaldean order
This is an ancient geocentric order of 7 planets. Our days of the week are tied to this order:


When viewed from Earth, the moon is the fastest planet and Saturn is the slowest. The rulership of each zodiac sign follows the days of the week starting with Mars (Tuesday) for Aries, Mercury (Wednesday) for Taurus, etc. Note that the decans (10 degree division in each sign, the inner circle) follow the Chaldean order as noted above. The chart is read counterclockwise.

Traditional order
Not sure when the rulerships were revised but this order has more symmetry. With the exception of the sun and moon, the planets rule 2 signs. The zodiac is split into day and night halves. The luminaries rule the summer signs and Saturn rules the winter signs. 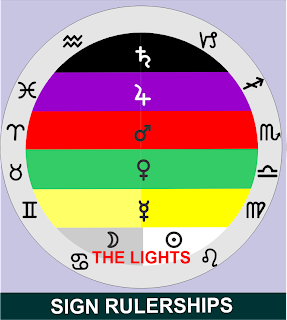 Modern order
I combined information from 2 websites: this article on rulerships and this one about the signs and orbits. Each sign has a day and night ruler. Outer planets Uranus, Neptune, and Pluto are included as well as Earth and Earth's 2nd (or 1st?) moon which I'll call Lilith.


Using this modern order, the decans have new rulers.
Minor Arcana correspondence
Everything I've found on the 'net shows the Tarot following the Chaldean order. I would rather use the modern order. At any rate, my card is 8 of pentacles. The Chaldean ruler is the Sun and the modern rulers are Mercury and Lilith.
Posted by Buddhagan at 12:48 AM