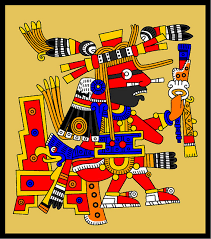 Xiuhtecuhtli (Shee-u-teh-COO-tleh) is a fire god known to the Aztecs and Mayans. His name means Turquoise Lord and is associated with the number one. His symbols are the butterfly and the cotinga bird. Xiuhtecuhtli is pictured with the serpent of fire Xiuhcoatl on his back.

These ancient peoples considered Xiuhtecuhtli as the creator of all gods and goddesses. He is celebrated as the central deity in the fire ceremony held every 52 years. Minor festivals were held every year at the hottest and coldest point. He is the patron god of kings and warriors and is usually depicted with a crown.

According to myths, Xiuhtecuhtli arose from the underworld as a pillar of fire. By going through earth to get to heaven, he is said to be holding the realms together.
Posted by Buddhagan at 6:00 AM