Pagan Blog Project - B is for Buddha 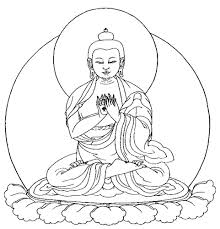 Buddha means "enlightened one" and most of the time refers to Siddartha Gautama (also known as Shakamuni), the founder of Buddhism. Buddha was not a god nor should he be worshipped as one. We all have the Buddha nature inside. Practicing meditation is one way to bring out the Buddha nature.

There are many Buddhas in the history of Buddhism. Different sects revere different ones. In Shin Buddhism, Amida Buddha is the way to the Pure Land. Yakushi is the Buddha of Healing and Medicine. He grants healing in this life and resides in the Eastern Pure Land. In some Nichiren Buddhist sects, Nichiren is said to be the Buddha of modern times.

Buddha should not be confused with bodhisattva. A bodhisattva delays his/her enlightenment to help others obtain Buddhahood. How selfless!

How did Buddha become Buddha?
Shakamuni was born a prince in India. He led a very sheltered life because his father didn't want him to see how cruel the world was. One day, Shakamuni snuck out of the palace and saw sickness, death, and poverty. Once he came back, he realized that all the riches and conforts did not bring happiness. Once again, he snuck out of the palace to find true peace. First, he tried deep mediation. When that didn't work, he tried a life of deep asceticism. Shakamuni nearly died since he was eating one grain of rice a day. He was revived by eating a meal of rice-mlk provided by a girl named Sujata.

Gaining much needed strength, Shakamuni realized that extremes are not the way to true peace. This is the Middle Way. He sat under a bodhi tree to mediate with a clear mind. What happens next is reminiscent of the Jesus temptation story. The demon Mara sent his daughters, riches, and lavish gifts to tempt Shakamuni. Then, he sent horrific monsters but Shakamuni held firm. Mara was defeated! Shakamuni finally had his a-ha! moment and became Buddha. Buddha's enlightenment is (correctly) celebrated on month 12 day 8 of the Chinese lunar calendar.
Posted by Buddhagan at 10:46 PM